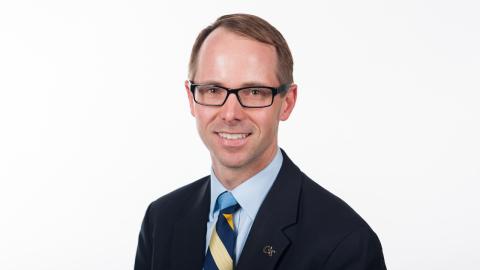 Colin Potts, current vice provost for Undergraduate Education, has accepted the position of provost and executive vice chancellor of Academic Affairs at Missouri University of Science and Technology.

Girardot has served as associate vice provost for Undergraduate Education since 2012, overseeing the operations and administration of the Office of Undergraduate Education as well as many of the co-curricular units such as the Career Center, Tutoring and Academic Support, Academic Engagement Programs (UROP, Living Learning Communities, and Student Innovation Programs), and Pre-Professional and Pre-Graduate Advising. In addition, he oversees campuswide initiatives, including Complete College Georgia, Momentum Year, Summer, and Special Sessions. He is currently Georgia Tech’s representative on the University System of Georgia’s General Education Council.

Prior to joining the Office of Undergraduate Education, Girardot was director of Success Programs (later the Center for Academic Success) and worked to develop and implement many of Tech’s academic support and transition programs. He regularly presents on topics related to student success and serves on several advisory boards and national organizations, including the National Resource Center for the First-Year Experience and Students in Transition.

“We are grateful for Steven’s continued service to Georgia Tech,” said Steven W. McLaughlin, provost and executive vice president for Academic Affairs. “His leadership, experience, and passion for student success will serve the Institute and the Office of Undergraduate Education well during this transition.”

A search for the next leader of Undergraduate Education will commence in the coming weeks. Girardot will serve until the position is filled.